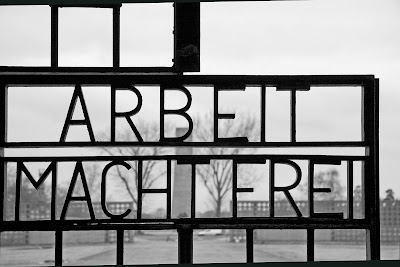 The motto on the gates of Sachsenhausen Concentration Camp at Orienburg, near Berlin.
Sachsenhausen was a Work Camp for Political prisoners, and many of the deaths here were due to the harsh working conditions, brutality and starvation. Work set nobody free here.

The idea of HMD is to commemorate and to educate people about the Nazi Holocaust, but this commemoration is inclusive of all the victims, not just the Jews. People of religions other than Israelites were persecuted by the Nazis, and also people seen as 'political' or anti social or just selected for punishment. Gypsies, Criminals, Priests, Homosexuals, Disabled, Prisoners of War were all victims of the Nazi Holocaust and HMD seeks to commemorate those lives as well.

Whilst the events of World War Two may be considered as 'The Holocaust', sadly it is now recognised that there have been many more holocausts since 1945 and even today people are being persecuted and 'ethnically cleansed' in a manner all too similar to the Nazi ways.

Recent holocausts include Cambodia, Bosnia, Rwanda and Darfur, and HMD seeks to ensure that such genocides are not forgotten and are not repeated. For Jewish victims of The Holocaust there is a rememberance day in April each year. 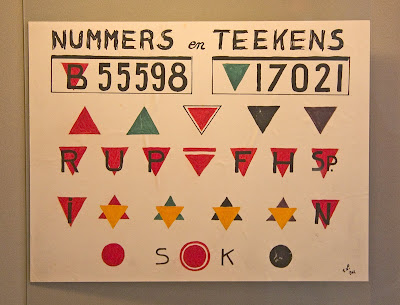 Almost everybody knows of the yellow star of David worn by Jewish prisoners, but in fact this was two yellow triangles put together. There were many other triangles, such as red for political prisoners (an apex up red triangle was used for Prisoner of War such as captured airman, seaman or soldiers). Pink Triangles for male homosexuals, green for criminals, brown or black for Gypsies, and lots of combinations. 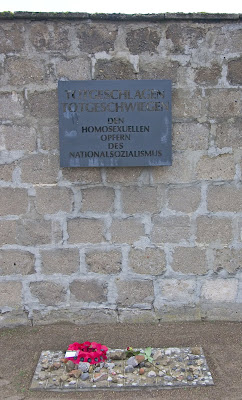 A memorial to male homosexuals. Some 50,000 men died in camps having worn the pink triangle to indicate their sexual orientation. 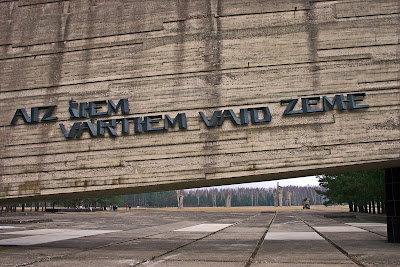 "Behind this Gate the earth moans"
Another country, another camp. Latvia was occupied by the Nazis on their way to the Russian front, and very quickly the concentration camp ethic was installed. Salaspils near Riga had a Transit Camp/Work Camp whose brutal regime caused the death of about 50,000 people from the Baltic States and from eastern europe, mostly gentiles.

For more information on Latvian camps, click on Salaspils 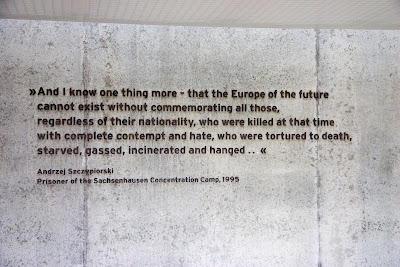 Polish writer, victim of the Warsaw Ghetto, contributor to the Warsaw Uprising, and one time inmate of Sachsenhausen concentration camp, pens an epitaph to the Holocaust. Oh, if only things were that simple. Human differences will cause more holocausts as one group try for supremacy or eradication of a pereceived different group.
In Kenya on this very day The Holocaust will seem like a million miles away, but will seem very, very close to those who are being burned in their churches or hacked to death on the streets.

Posted by redsimon at 16:43 No comments: