My sister and I have encountered the 'Best Western' chain of hotels before, since they exist in many countries; suffice it to say "Adequate Western" better describes them. This chain appears to buy once proud establishments and does little with them except maintain them. However the Best Western Rose and Crown, Tonbridge did provide us with free WiFi which worked tolerably well, as did the plumbing. I can't comment on the food because in true Latvian tradition I wasn't allowed to have any here.

Best Western only provided us with twin beds, but they worked well enough. One of my readers has asked, "how is your back?" Well I think the nerve is still trapped, and certainly small movements such as turning in bed, etc are the most difficult and most painful; perhaps Juris is glad of the single beds now. Once I am up and about there is too much to do to spend time thinking about my back pain. Besides I would rather complain about the Grand Issues such as The Blue Badge tyranny than complain about my own pain!

We arrived at Tonbridge having knocked off Waddesdon Manor where we spent too long to be able to tick off another attraction. However, there was time for Mama to have a rest whilst Juris and I explored this little town, The Waitrose of course was closed as this was late Sunday afternoon, but we ambled down the rather pretty main street with some properties, such as the Rose and Crown Hotel, dating back to Jacobean times, whilst many others were early Victorian. It perhaps looked a little tired in places, but pleasant enough. The Motte and Bailey Castle was dominant presence on the banks of the River Medway by the rather charming iron bridge across it.

Juris and I investigated the options for eating and returned with Mama to take advantage of Domino's Two for One deal on large Pizzas for collection on Sunday. We returned these to our rooms at the Rose and Crown and ate enthusiastically after a day of thin pickings. The church bells rang out whilst we feasted, and it turns out that my niece Catherine, who lives in Kent, was actually ringing them as Bell Captain.

You can believe by now that cold Dominos Pizzas formed our breakfast, before we set off for two local attractions. Our first was the home of Winston Spencer Churchill at Chartwell, where delightful Kent lanes with Oast houses and little brick villages led us.

It may be four decades since I last went to Chartwell, and it all seemed bigger this time around. Mama was mesmerised by it all. Having foolishly accepted a timed visit to the house 2 hours ahead, we were almost forced to spend 2 hours in the garden; but it wasn't that difficult. The gardens were blooming wonderful, and the only minus point for us is that there are steps. The NT has provided a number of wheelchair friendly ways around but you will still find some steps up or down barring your way to some feature. Mama would not stopped in this way, and abandoned the wheel chair and strode onward.

There was a wonderful rose garden, which in mid June was at its prime. Then there was the Golden Rose Walk, a present from the children to their Churchill parents on the occasion of their golden wedding anniversary. A lovely gift, and a delightful place to stroll, and also to sip tea from our flask. The garden studio also helped to fill out our time as Mama took a keen interest in the paintings made by WSC all over the world; politician, strategist, writer, bricklayer and painter, there was no end to the talents of Churchill.

Thirty mintues still remained until our timed entrance to the house, but I negotiated an advance and we entered at 13:00hrs instead of 13:30. The wheelchair was parked outside and Mama set off inside climbing without complaint any stairs that confronted her. Chartwell is a delightful house with charming rooms of good proportion, now filled with His memorabilia; what's not to like. Retrieving the wheel chair from one side of the house to re-unite with Mama on the other side was quite a feat, requiring me to be escorted the wrong way through the house, and then having to circumnavigate the gardens and lug the device up a couple of flights of steps.

After that effort I unanimously decided to visit the restaurant and purchase two "sandwiches". £5.50 is probably the most I have ever paid for a single sandwich, the bread surrounding the Tuna and Cucumber and also the Bacon and Egg sandwich made it very tasty. Don't tell Juris how much they cost. We availed ourselves of the facilities and ate the NT fayre before setting off for venue two.

More Kentish lanes and then we arrived to Hever Castle where our wheelchair status at least allowed us to park on the lawn close to the house. We explored first the gardens, once more entering into a world of Roses, I cannot believe how many Roses we have seen since leaving Luton Airport. And to cap it all, Hever Castle is the home of the Tudor Rose dynasty, the unification of the Red Rose of Lancaster with the White Rose of the House of York. This dynasty was all explained, and complicated it is, on panels within the Castle.

Little remains of the Boleyn (crafty, conniving, ruthlessly scheming Tudors) family as much of Hever Castle was refitted when the Astors moved in just over a century ago. But it has been tastefully done, and was pleasant enough to explore. Mama did it all, including the spiral stone staircase, but was granted remission and allowed to descend by a simpler staircase. Then back to the garden, walking to the lake through the Italian garden, then back to the car where the final portions of the Pizza and the remains of the Chartwell cucumber sandwich were eaten.

Cousin Trish said I must be mad to do Chartwell and Hever in one day, and we were but did it anyway. Returning to Tonbridge the question of an evening meal raised itself. After some lively discussion we ended up at a fish and chippery; where I was disgusted to find that I qualified for an OAP serving of fish and chips at £3.80. I didn't mind saving the money, and the portion was plentiful, but the suggestion that I might be "old" is intolerable. And so exhausted to bed, no time to write up this blog. 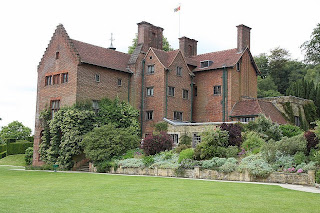 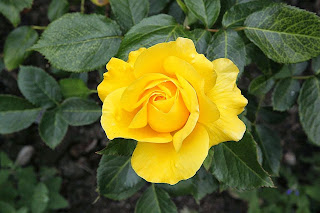 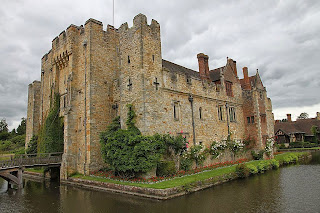