This post celebrates a FANTASTIC Christmas spent on Lake Garda at Bardolino. Thanks to the boys and girls who joined the "Just You" tour to the Park Hotel Gritti in Bardolino for Christmas 2006.

PRESEPIO: A nativity scene, also called a crib or crèche (meaning "crib" or "manger" in French) generally refers to any depiction of the birth or birthplace of Jesus. In Italy is known as presepe; It has been introduced by Saint Francis of Assisi. 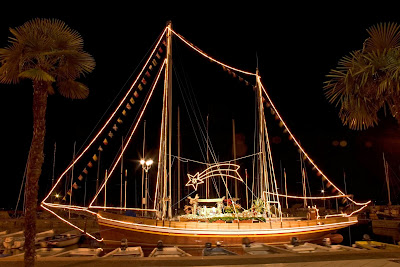 This first picture shows the Presepio for Bardolino which was mounted on a yacht in the little harbour, and here it is lit at night. The shot below shows some detail of this presepio as the sun sets behind the yacht. 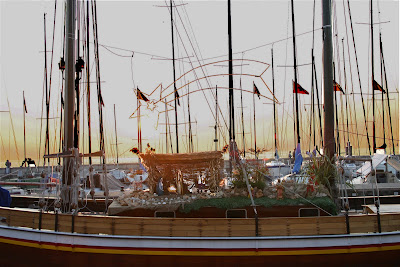 The little lakeside town of Garda had a much bigger Presepio; about a dozen scenes on the lakeside using lifesize mannequins. 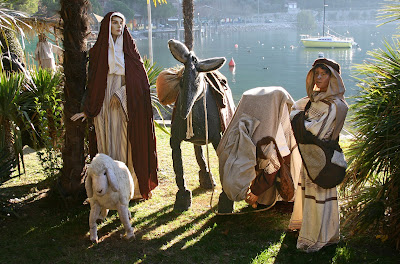 In Venice I came across this Presepio of the much more conventional kind displayed in Piazza San Marco next door to Basilica di San Marco in Venezia. For a whole album of Venice shots click here. 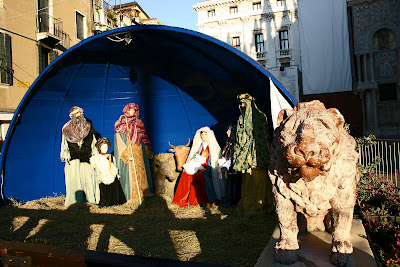 And finally, one of the grandest Presepios I came across was this star of Bethlehem bursting out of Verona's Arena; sheer Opera ! 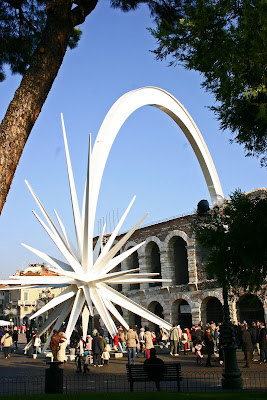 PRESEPIO: Christian Nativity scenes, in two dimensions (drawings, paintings, icons, etc.) or three (sculpture or other three-dimensional crafts), usually show Jesus in a manger, Joseph and Mary in a barn (or cave) intended to accommodate farm animals. A donkey and an ox accompany them; besides the necessity of animals for a manger, this is an allusion to Isaiah: "the ox knoweth his owner, and the ass his master's crib; but Israel doth not know, my people doth not consider" (Is. 1:3). The scene sometimes includes the Magi or Three Wise Men, shepherds, angels and the Star of Bethlehem. The traditional scenes that show the shepherds and Magi together are of course not true to the Bible story, since the Magi arrived much later (Matthew 2:1-12) than the shepherds(Luke 2:7-16).

Although St Francis of Assisi is credited with the invention of three-dimensional Nativity Scenes, drawings and paintings existed earlier. The tradition was brought into Spain from Naples during the reign of Charles III of Spain. (see Wikipedia )

For some more beautiful views of Venice and Verona, click below:

Last Christmas I wrote of spending a lot of time with a newly found Latvian friend who then returned to study in Riga in autumn 2005. Well I didn't honestly know whether we would meet again, but 2006 has provided us with many chances to meet up. My family time has been limited during 2006 because I needed to make the best of another kind of relationship that hasn't been available to me before.

Easter, as you may already know from previous correspondence, was spent with Juris in Latvia, Lithuania, and St Petersburg.
(see http://simonsred.blogspot.com/2006_04_01_archive.html for Blog) This trip has had a major impact on me, and I really want to explore Eastern Europe more in the coming years.

St Petersburg was quite amazing, and we packed a lot of visits into our six days there. The highlights for me were not the Grand Palaces and Churches but much more down to earth things. Such architecture was mainly "non-Russian" and I am not a great fan of Baroque and prefer Neo-Classical to be ACTUAL classical such as I am familiar with in Italy.

Very impressive, nonetheless, but what was viewed was usually only about a decade old after having been restored or even rebuilt to right the ravages of Nazi occupation and post war austere Communism.

And finally SPB allowed us to celebrate the SECOND Easter of our holiday when we attended the Saturday Night service for Orthodox Easter Sunday, and joined in a midnight candlelit procession outside and around the Vladimiri church whilst traffic on a main thoroughfare was halted and thousands stood to watch.

We arrived in SPB on the night train from Riga and what a treat this was; Orient Express and all that but in a charmingly tired and rather run down version. We travelled First Class, but that didn't give us any more sleep than the second class travellers - just more privacy.

We chugged through the Baltic night at about 40mph sometimes adding - or shedding - engines and carriages and stopping for unknown reasons.
The border stop just before midnight meant we had to present our documentation to exit EU, and about half an hour later we had to get permission to enter the "USSR", but they don't call it that anymore. Russian formalities demanded four people check us out, most of them being retired Olympic female shot putters, 2 pieces of paper had to be signed, and the cabin had to be searched. Sleep was really rather pointless after that.

My view of Russia was a little shaped by the extraordinary sights I had already enjoyed in the Baltic states, so SPB had an uphill battle to compete.

Here a concentration camp where almost 100,000 died, but forget "Schindler's List" for Salaspils scarcely has a mention in the Jewish Holocaust record. This concentration camp killed gentiles from Riga and neighbouring states who showed opposition to the Nazi occupation; they worked themselves to death in the camp or died because they would not work.

And when the Nazis retreated from the Baltic States the advancing Russian army dealt brutally with anyone who had saved themselves from German attrition by collaborating. It seems that whichever side you were on in the Baltic States, you were bound to lose; quite a contrast to the British experience.

In Lithuania we went to our first Easter, attending the evening service at a grand 1930s Cathedral that had only been opened after years of restoration to get it back from being a Russian radio factory and warehouse and consecrate it.

In Kaunas too we saw replacement monuments to Lithuanian freedom fighters and other figures destroyed by Russian Rule.

In the Lithuanian countryside we came across the Hill of Crosses at Siauliai; a place where Lithuanians had marked their Christianity and kept alive their cultural identity for 800 years by erecting crucifixes on a little hill to create their own Calvary. We gave a lift to a hitch hiker who told how Russians had kept destroying the crosses but people simply returned and erected more; he told too how these state-sponsored vandals often died soon after their dastardly deeds.

Whilst driving towards Kaunas we entered a small country town and towering over all the wooden Baltic bungalows and the Russian-built 5storey apartment blocks was a blooming great Basilica. Church and Monastery of the Lord Revelation for St. Mary the Virgin (Dotnuvos Viešpaties apreiškimo Švè. Mergelei Marijai bažnyèios ir vienuolyno ansamblis). We found ourselves being 'collected' by an old lady washing the floor. We followed her nervously across the church yard and into a large building which turned out to be the Monastery.

A small boy was despatched and returned with a jolly rounded Priest who spoke good English and invited us to tour his humble place of worship. However, he had to attend a meeting and asked us whether we would let his father guide us, and this he did communicating to us - well to Juris at least - in Russian. We had an extraordinary tour of the church, the empty monastery and an attic room containing hundreds of church vestments which take religious dress back many centuries.

A unique experience and only made possible by my Russian-speaking companion. Oh I could go on for ever. Latvia and Lithuania changed me, and I really must return.

Here is Europe as I didn’t know it. Here is heritage and culture that we actually share - Latvian wood was used in Henry 8th's Britain - here is Christianity and common ideas that we have cast aside to embrace other cultures that are quite literally foreign to us.