I know (from the BBC News), that the South of England (as if anywhere else actually existed in the British Isles) has had the worst rain since the time of the Dinosaurs - or so they would have us believe. But it has rained over our Lake too, all night long and very heavily. Our plans to walk around the Lake before lunch are washed away. Not sure what we will do this morning as no activities are organised.

Last night in the rain some of us went to the local Midnight Mass. although it was only just around the corner, the climb up and the continuous rain found one of the cute waiters doubling up as Transit driver and shuttling people up the hill to the Chiesa di Griante in lots of 8.

The service itself was held in a small domed Basilica where all were deafened by the sound of two industrial heat units hung from the balcony whose fans were clearly designed to pump hot air into a large industrial unit.

In front of the altar a motley collection of local children gathered clad in winter coats, their ages ranging from about 10 years to 18. They were shepherded by two female teachers who kept yanking the odd child into a new position, or separating one from another because of misbehaviour. It was clear that they were reluctant participants in the proceedings. A microphone was passed around them, sometimes working and sometimes not, and various recitations made. Then they started to sing, Adeste Fideles, at a pace much slower than I am used to, and at a different pace to that of the organ. Eventually some kind of order was obtained and both young singers and the organ more or less got on the same note at the same time; well they did when they remembered the words. Clearly no rehearsal had ever been made.

The children marched out and there was a pause for several minutes filled only with heating units giving voice to their task. Then the back doors opened and in filed the same children now garbed in surpluses and looking much more professional as they processed down the church ahead of the clergy. On the gallery above them the professional choir managed to cover the sound of the air con, although somebody did find a lower setting for it which was helpful.

With probably more than one third of the church filled with English from my hotel, the Priest COULD have made a little effort to include us; a hymn sheet in Italian would have helped us to join in. Anyway the service proceeded, the Organ often anticipating the its cue and those on the altar having to re-start or catch up.

A huge number of people on the altar ebbed and flowed, disappearing behind the altar before reappearing later. And at the least opportunity the 18 year old let rip with the incense and those on the altar gradually disappeared from view behind the sweet-smelling cloud of incense which started to irritate the congregation and cause coughing. With all this meaningless palaver it is no wonder that churches are empty. Nobody wants it, it is irrelevant, and time the Church embraced short punchy services for this millennium and not a bygone era.

I gave up after 40 minutes and walked down the steep and barely lit track to the lakeside with the rain largely in remission. And so to bed.

There are a few Christmas photos below. We have Christmas lunch at noon today, but nothing else is planned. However tomorrow is an early start as we go into Switzerland come back by train. 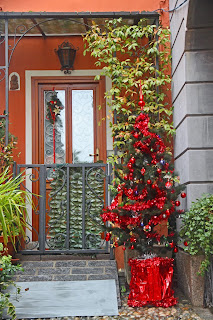 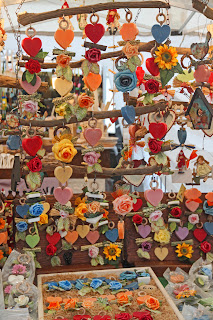 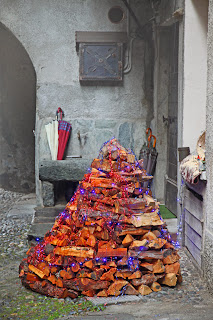 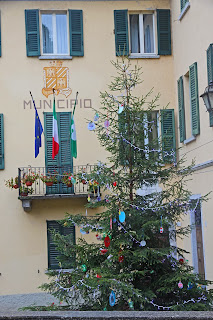