Our first day in Cornwall began with BREAKFAST, now there's a novelty on this trip! My sister's extensive larder provided ANYTHING that anyone wanted, in my case fresh Olive bread, cereal with fresh strawberries. Mama and Juris made their own fresh salad and enjoyed sliced ham on good bread.

Then we set off to show the beauty of Cornwall and there is no finer showcase than the North Cornwall coast. Driving passed the 4 miles of golden sands at Perranporth, then Porth, Watergate Bay, Mawgan Porth and beyond on the coast road that skirts Newquay and reaches the National Trust lands at Carnewas, commonly referred to as 'Bedruthan Steps'. Here we parked up, guided to a disabled parking space where everyone was decanted.

We set off on the clifftop path the wheelchair passing within a foot or so of sheer drops down to still azure blue Atlantic beneath. The colour was vivid, but the surface was too calm, stilled by the high pressure sitting overhead; that same weather system did, however, deliver us the intense sunlight to make everything glow.

My cousin had messaged me: "I trust it is sunny in Cornwall too and that you don’t intend to take Mama on a cliff walk – with or without the wheelchair!" but by the time I read this it was already too late. Mama had been on a cliff walk in and out of the wheelchair. Though we didn't press Mama into going too far, the views were just so vivid that nobody wanted to be short changed of them. We took freshly made Watercress soup in a truly homemade NT cafe served with chunky saffron bread, and I can thoroughly recommend this enterprise.

A short drive across country took us to the 16th century manor house of Trerice, a place that has fond memories for me as both my mother and father would go here at the drop of a hat. Father would march in through the front door and ask to be allowed to cross to the Barn Cafe without having to pay admission; he was always allowed. And so it was with us, Biddi and I negotiated our own free passage to the Barn Cafe, and agreed admission to the house for Juris (as member) and his mum (free as less able). Biddi and I sat at table in the Barn garden supping lovely tea and eating home made Blueberry Victoria sponge cake, whilst the Latvians used up another chunk of the NT membership; that £100 quid has already saved us money.

After that I set the TomTom to take us back to Biddi's house by the shortest route, fully realising just how exciting this might be! True to TomTom's best traditions he found us a long lost ford and then took us down a very narrow lane near St Newlyn East. Now I am used to driving down Cornish lanes so narrow that the wing mirrors get ripped off and all the paint gets scratched from the sides of the car, but this was something else. There was only 3 feet between the foliage on each side of the lane and we needed to proceed slowly and keep the windows shut. Clearly no vehicles had passed down here for a long time, although the cow poo down the centre of this lane told us of bovine traffic.

You can stick your motorways, this is better driving. We cut across to Cubert and then by the back lanes to St Piran's Oratory where St Piran first set up shop in about AD 600 bringing Christianity to Cornwall from Ireland. The remains of the ancient Oratory are still sunk into the Perranporth sand dunes, kept buried because that preserves them better than other means in the shifting dunes.

Thus ended our first Cornish excursion. We will eat a proper meal tonight, the one denied by our non-arrival last night. But tonight we will have Champagne to toast Juris' study success and the imminent start of his research project back in Latvia. Cheers. 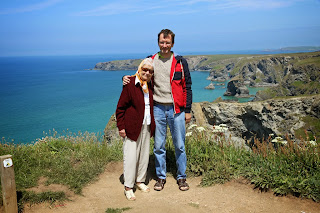 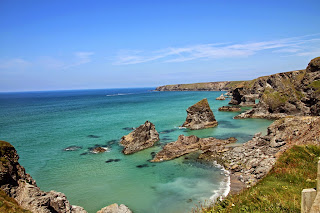 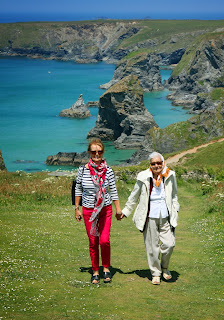 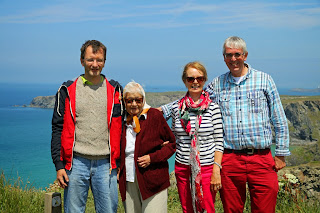