Thursday began again with BREAKFAST; that's two days running. Biddi opened her larder and I ate delicious sour dough bread toasted with butter and Marmite that dripped through my fingers, and after cereals with fresh strawberries and piled high with a dollop of clotted Cornish cream. Mmmm. Mama and Juris made salad and had this with fried leftovers from last night. Everybody had whatever they wanted.

For our final day in Cornwall I chose to go to West Penwith, the very toe of Cornwall. We called in at the Truro Sainsburys arriving there almost on fresh air as the few litres of fuel I had added at Moretonhampstead were running dry; I wanted to be sure to get my double points at Sainsburys on a full tank, and incidentally saved 3pence a litre from what was offered on the A30.

Then via the A394 and Helston to the outskirts of Marazion where we sat in the beach side car park with St Michaels Mount towering above us. A perfect spot for morning tea, and we sat on the beach with our flask and our lemon cake. Mounts Bay showed us its bluest sea and its bluest sky and it was a joy to pause with our tea and cake amidst such marine beauty. Juris and I went for a paddle in the sea, but the shingle beach was uncomfortable on the feet and daunted Mama who had been game to try it.

Then back to the A30, around the back of Penzance, through Sheffield and Leedstown before reaching Lamorna Cove. We parked precipitately above the boulder strewn shore before ambling around the little harbour wall which was thoroughly wrecked by the winter storms. It wasn't as pretty as I might have hoped, but we still had the blue sky and sea, and few other people to spoil our enjoyment of it. A flask of soup with sandwiches provided an excellent picnic at this little cove and we relaxed in the hot sun.

After that I headed to St Just and my favourite road from St Just to St Ives. However my passage was spoiled by German tourists driving cars that were twelve feet wide and they stopped at the approach of anything, even a cyclist. Of course their vehicles were no wider than mine, and whilst it is true that this road is scarcely much more than 12 feet wide and sometimes rather less, it is mostly capable of letting two vehicles drive past each other. The Germans were over cautious and it would be better if they stayed in areas that have bigger roads.

So I quit my favourite road earlier than usual and cut to St Agnes where we could chill out before our evening meal.

Last evening, after our evening meal, Juris and I took a walk from Wheal Coates Mine above Chapel Porth and down to the famous cliffside engine house of Towanroath. This is one of my favourite walks, and only in June can you see the western end of the engine house lit by the sun. Tonight after our meal we took Mama to Wheal Coates Mine for a walk in the evening sun, though NOT down to Towanroath. After that we drove to Chapel Porth beach arriving just moments before the sun crashed into the sea and it was snuffed out. Day ended. 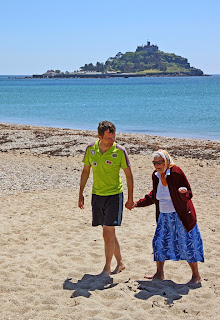 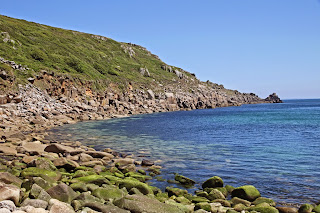 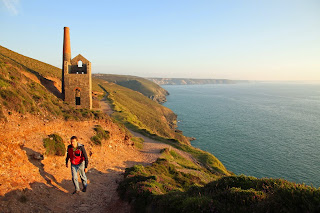 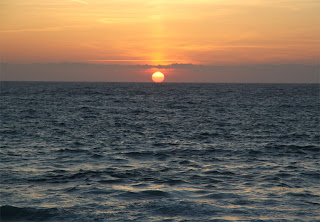